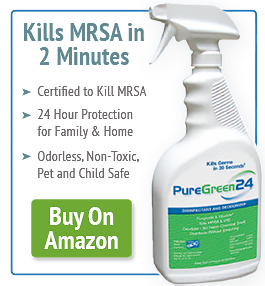 MRSA bacteria travel through the air on skin or dust particles from people who are infected, or from carriers.

It’s commonly known that MRSA is transmitted by touch, but few people are aware of another way this infection can spread: as airborne MRSA.

The risk of transmission of MRSA or Staph in the air is well established in many studies. However, neither the CDC MRSA hospital precautions nor the media is letting the public know about this problem. More importantly, hospitals and health care facilities aren’t publicizing this risk. I even know of doctors and RNs who have expressly denied that these infections can spread through the air.

Let’s look at how these bacteria become suspended in the air, what the risks are, and what the studies say about MRSA in the air. Then let’s review some techniques to help guard against germs floating in the air.

How and why does MRSA spread into the air?

Both types of people can be a source of airborne bacteria. This is because the average person sheds millions of skin particles throughout the day. Because these bacteria love the skin, they can hitch a ride on tiny skin particles that circulate into the air. Particles landing on other people can lead to colonization of their skin with the bacteria. If the particles are small enough, they can also enter the nose (also causing colonization) or lungs (possibly causing pneumonia).

Studies have been performed in hospitals to see how these infections move through the air. Their findings can help you understand the risks, whether you are in a hospital or at home.

You’re at increased risk when sharing or visiting hospital rooms The Leeds University study highlighted the potential risk of catching MRSA in two-bed hospital rooms. If one of the patients in a room is infected, the other patient could come into contact the bacteria through the air. The 2001 study above also highlighted that people who were colonized (and not infected) also spread the bacteria into the air. The same risks apply to visitors or hospital workers who enter the room.

What’s more, the risk comes from the air itself, without direct contact with the infected patient or contaminated surfaces or objects. While MRSA air contamination is a risk in hospitals, the highest risk is still from direct person to person contact, or from touching contaminated surfaces or objects. So good hand washing and personal hygiene are still your best line of defense when visiting a hospital. But to protect yourself as well as possible, you should also be aware of the risk of bacteria in the air and take steps to reduce the risk, as outlined below.

Because standard cleaning and disinfection methods (both at home and in hospitals) only focus on contact surfaces, different precautions are needed to address airborne Staph and MRSA.

Prevention strategies for hospitals and caring for others

In hospitals: One of the best preventative measures for air bacteria is for hospitals to isolate infected patients (and for those who are simply colonized) to reduce the risk of the infection spreading. While some hospitals do this, many do not. Find out about the hospital’s policy on sharing rooms with MRSA patients and take extra precautions if you have to share a room with such a patient.

Stay clear of uncovered wounds, such as when dressings are being replaced. Do not touch anyone’s wounds or dressings. Wash your hands after visiting a hospital room.

When staying in a hospital, use a method to reduce bacteria in the air. This will reduce your chances for getting infected during your stay (see suggestions below).

Caring for others: Wash your hands after caring for wounds and infections. In-air bacteria can be present when caring for anyone who’s infected or who is colonized. Use techniques to reduce air bacteria if someone in your home is infected (see below).

How to reduce airborne bacteria

HEPA Filtration: A 2006 study in the UK looked at filtering the air in a hospital ward to see if they could reduce MRSA levels. They initially found that 95% of areas tested had measurable contamination. They used a portable HEPA filtration unit and found contamination decreased by 75%-90% in these same areas. The study researchers concluded that filtering the air is likely to reduce cross-infection risks significantly with little cost and effort.

There are many types of HEPA filtration units, and they have different airflow rates. However, it seems that running a portable HEPA filter either at home or in a hospital room could reduce the risks.

Many essential oils are antibacterial and thus you’ll see data showing many types of oils are active against bacteria. According to studies at Weber State University and at Wythenshawe Hospital, a simple and easy way to reduce the risk from bacteria in the air is to diffuse essential oils. This method has been shown to reduce many types of bacteria, including MRSA.

Wythenshawe Hospital Burns Unit in England found that using a vaporizer to diffuse a blend of oils into the air combated MRSA bacteria. They ran a 9 month study and found that in-air bacteria diminished by 90% and the number of hospital infections were also reduced.

Another study looked at the antibacterial activity of geranium and lemongrass oils over a range of concentrations by direct contact and by vapour diffusion using a hospital-grade diffuser. The study examined MRSA, VRE, and other superbugs. In an office environment, the diffuser provided an 89% reduction of these superbugs after 15 hours of use.

Many infectious diseases can spread in the air, including MRSA and Staph. While good hygiene and hand washing are crucial to protect against surface and direct contact risks, it also makes sense to reduce the risk of airborne germs settling on your skin or getting into your nose or lungs.

One of the easiest and most effective ways to control germs in home or hospital air is diffusing antibacterial essential oils. HEPA filtration can also be a help. Keeping isolated from people with active infections can also reduce the risk, where practical.