The new CDC report summarizes the 18 highest threat antibiotic resistant infections. MRSA is near the top of the list.

On Monday the US Centers for Disease Control and Prevention (CDC) released an extensive report about the growing threat of antibiotic resistance in the United States. The report details the risks, prevalence and national impact of 18 different superbugs, including MRSA, rating each according to level of concern. The report also outlines what can be done to combat these growing threats.

Serving as a wake up call for doctors, patients, industry and the general public, this report is meant to raise awareness of the problem and provide solutions to fight back against the increasing number of superbugs. Below is a link to the full report on the CDC’s website:

“Antimicrobial resistance is one of our most serious health threats. Infections from resistant bacteria are now too common, and some pathogens have even become resistant to multiple types or classes of antibiotics. The loss of effective antibiotics will undermine our ability to fight infectious diseases”
Dr. Tom Frieden, MD, MPH
Director, US. Centers for Disease Control and Prevention

Using laymen’s terms, along with easy-to-read tables and infographics, the report describes what antibiotic resistance is, how it started, and why it’s evolving into a global health threat. The health risks, improper use and inherent limitations of antibiotic drugs are also described in detail.

MRSA and other superbugs: A growing public health threat 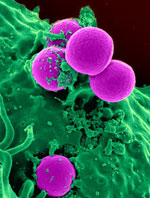 The latest superbug statistics are found inside the report, revealing that at least 2 million people in the US catch antibiotic resistant infections each year. And at least 23,000 die from these infections. The CDC also states that many more people die each year from other conditions that were complicated by an antibiotic-resistant infection.

The CDC estimates 80,461 invasive MRSA infections and 11,285 related deaths occurred in 2011. They also state that an unknown but much higher number of less severe infections occurred in both the community and in healthcare settings.

The report includes summaries for the eighteen most worrisome superbugs, including CRE (carbapenem-resistant Enterobacteriacea), C. difficile, MRSA, Acinetobacter and more. The report also includes key statistics, public health threats and what people can do themselves to reduce their risk.

“…no one can completely avoid the risk of antibiotic-resistant infections. Only through concerted commitment and action will the nation ever be able to succeed in reducing this threat.”
CDC, Antibiotic Resistance Report Executive Summary

What’s missing from the report?

The report is a good read for anyone interested in why infections like MRSA are so hard to treat with antibiotics and what you can do about the problem. However, what’s missing is the important role that natural and alternative medicine can play with managing these infections. Natural remedies help control antibiotic resistance by minimizing antibiotic use. They also bring relief for hard-to-treat infections that don’t respond to antibiotics. Unfortunately, mainstream medicine still refuses to acknowledge the legitimacy of alternative medicine on a large scale.

Another thing missing from the report that plays a pivotal role in many superbug infections is biofilms. The National Institute for Health (NIH) admits that biofilms are involved in 80% of chronic and recurring infections. While some superbugs don’t create biofioms, others like MRSA certainly do, and they make treatment with antibiotics much less effective. Focusing on how to break down these protective layers that surround and protect bacteria in the human body is a key area of treatment that deserves more attention.